The pandemic is worsening Zimbabwe’s economic and political

Zimbabwean activist Elvis Mugari has been exiled in South Africa since January 2019, when he became a wanted man in his native country. The motive: organizing a peaceful protest against a rise in food prices which was violently repressed.

“The military killed 7 people, hundreds were arrested, women were raped”, he recounts. The government will not confirm these figures, saying only that they reacted to violence coming from protesters.

The covid-19 pandemic has only worsened political conflicts extant in Zimbabwe for more than two decades.

Around 34% of the population lives in extreme poverty, inflation is above 300% – the second largest in the world. Precarious living conditions for the working class have amplified the dissatisfaction with a government that was under pressure before ever taking office.

“The regime is responding with a heavy hand to workers’ demands, denying them the right to engage in labor activism, to petition, to protest. They are being arrested, kidnapped and attacked just for demanding better working conditions”, described Mugari, as he regathers his strength to “go back and face the monster head on”.

The Zimbabwe Congress of Trade Unions (ZCTU), the country’s largest union, sees the current president, Emmerson Mnangagwa as illegitimate. Mnangagwa belongs to the Zimbabwe African National Union (ZANU), the same party as former long time leader Robert Mugabe, and rose to power in 2017, after resigning as vice president and being propped up to Head of State by the army, forcing the 93 year old Mugabe to leave power.

The list of accusations against ZANU and Mnangagwa include corruption, coercion of the Judiciary, persecution of journalists and political opponents, as well as labor rights violations.

The last point was publically mentioned by Clément Nyaletsossi Voule, a UN special envoy to the Zimbabwe.

“State sanctioned violence already existed under the Mugabe government but the situation got worse. Mugabe used the police, but Mnangagwa uses not only the police, but the military and the Judiciary as well”, affirmed ZCTU secretary general, Japhet Moyo, who calls the current government a dictatorship. “In just two years as president, he has accused 17 opposition figures of treason, while Mugabe in 40 years, only laid the allegation against 4 people.

The 70’s and 80’s southern Africa was marred by wars for independence, after centuries under European colonial rule. In countries like Zimbabwe, Angola and Mozambique, independence was only achieved after an armed struggle against the colonizers.

“In Zimbabwe there was a war and a negotiated transition, in which one of the main conditions was the maintenance of the property system. Therefore, white farmers were able to keep their lands”, states Paris Yeros, a doctor in International Relations and professor of the Federal University of ABC (UFABC).

“This happened due to the fact that South Africa was at the tail end of its fight against apartheid, and it was determined that Zimbabwe needed to ‘take it easy’ so as to not create conflicts that might affect the ongoing negotiations in the neighboring country.

As soon as apartheid ended in 1991, land reform resurfaced on Mugabe’s agenda, eleven years after coming to power in 1980. These reforms finally  came into effect, forcing white farmers to hand over their lands to black farmers.

News of the redistribution of land in Zimbabwe, without proper compensation to the land owners, echoed in the West as a threat.

“There was a very strong reaction. The IMF and the World Bank obviously cut off financing. In 1998, military sanctions began, and the country could no longer purchase goods from the western world”, added Yeros. 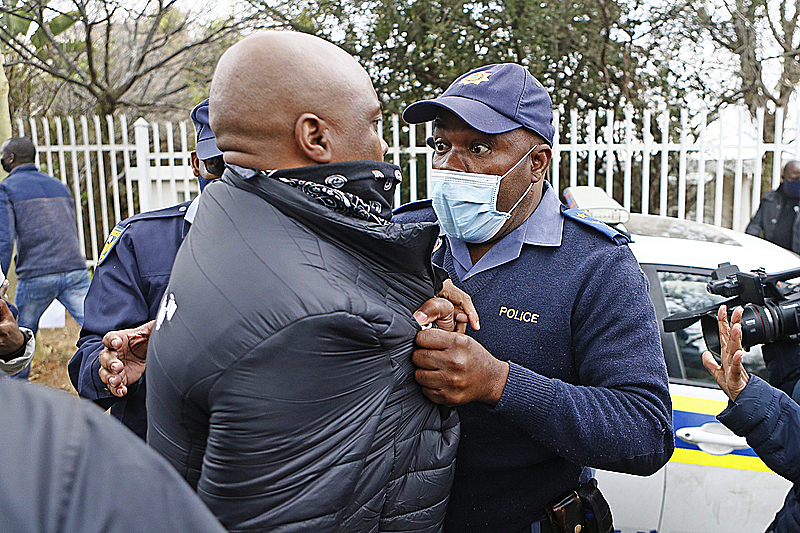 In 2001, the United States and the E.U imposed unilateral economic sanctions against Zimbabwe, restricting the exchange of goods and services, imposing travel restrictions on politicians and suspending cooperation among governments.

Within the country itself there was also reaction – even prior to the land reform. Political activists and sectors of the working class who had supported or even fought in the war for liberation broke with Mugabe, and began joining the opposition in 1995. The accusations made then, are similar to those made today: authoritarianism, corruption, coercion of the State.

“When the covid-19 pandemic hits, the conflict had been ongoing for 20 years already. Thus, the opposition in Zimbabwe includes everything from the United States, to large estate owners contrary to land reform, and even the labor union movement”, highlights Yeros.

Though the intent behind land reform is almost unanimously supported among opposition figures – except former land owners themselves – Mugabe is criticized for utilizing the process to benefit allies and veterans of the fight for independence.

Elvis Mugari defends an investigation into land distribution in the country, and a resumption of land reform measures based on the concept of “one man, one property”. According the oppositon figure, the government has never combated the new forms of land grabbing practices that have developed in Zimbabwe since the year 2000.

Zimbabwe’s economy depends on mining and agriculture, mainly tobacco, sugar, corn and cotton. The adoption of the dollar as the official currency in 2009, reversed the trend of a declining GDP, but did not bring about the stability that was promised.

The government alleges that economic sanctions imposed by the United States and the European Union have increased the price of exports due to fines and restrictions, .

On March 4th of this year, when covid-19 began spreading throughout the African continent, Donal Trump renewed sanctions on Zimbabwe for an indefinite period. “Zimbabwe had ample opportunity to stabilize southern Africa and open the doors to increased cooperation with the U.S. Unfortunately, the Emmerson Mnangagwa government has not given us any signs that it has the political will to implement any of these reforms”, said a White House press release published on that date.

Mugari explains that ending sanctions is not one of the opposition’s central demands. For the activist, blaming sanctions for the country’s socioeconomic woes is to relieve the regime of any responsibility for the crisis.

“The killing of protesters by the army in 2018, the violent repression of protests in 2019, the beatings of protesters in August 2019, as well as the ongoing wave of kidnappings and torture of government critics, union leaders, and opposition members, show that sanctions should be intensified until the regime shows regret and begins respecting the Rule of Law”, he affirmed.

Paris Yeros calls attention to Zimbabwe’s non-alignment with the West in the political and military spheres.

“After 2003, with the exception of Botswana and Tanzania, southern Africa signed a multilateral defense pact. Thus, it is shielded, in contrast to the rest of Africa where NATO and the CIA are present. These are achievements of the liberation movements, which were able to consolidate these gains in relation to security.

“There is of course, repression, the detention of journalists”, adds the professor. “Obviously, this isn’t good for democracy, but it happens in other countries, even in South Africa, these political assassinations and corruption also”.

While analyzing the violations of people’s rights being committed, Yeros points to the fact that there can be no land reform in Zimbabwe without the radicalization of the Judiciary.

“They violated private property in order to implement land reform. There, begins the debate surrounding the Rule of Law, since the judicial system automatically defended private property. They had to retire judges, restructure the system, and mobilize the army to defend these occupations”, he highlights.

The UFABC professor admits that it is difficult to characterize the Zimbabwean State. “There are conceptual problems that trouble us. We went through a revolutionary period. The party has a Leninist structure, which comes from guerrilla warfare, but ideologically it is more ‘petit bourgeois’, going from neo-liberal all the way to radical”, he explains. 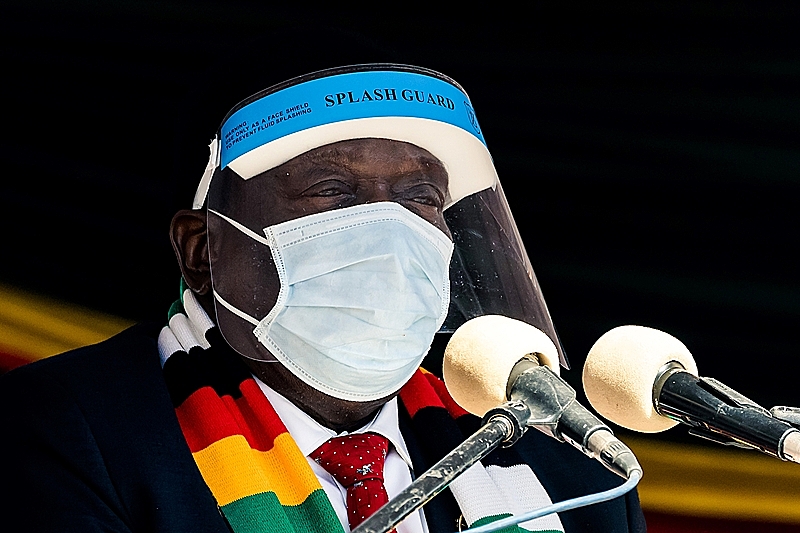 “There was a neo-liberal economic policy between 1990 and 1996. Right after that, the country went on a collision course with the IMF, and since 2005, there have been a series of attempts to normalize relations with the West, including adopting the dollar as the official currency. At the same time, they are repressing dissidents internally and imposing limitations for foreign companies in the mining sector”, concluded Yeros.

“There are many contradictions. Banks were never seized, an internal bourgeoisie with its own interests was formed, agricultural output was reinserted into the global market, using the logic of multinational enterprises”, he exemplified.

With 15 million inhabitants, Zimbabwe has less than 300 confirmed covid-19 deaths, however, the consequences of the pandemic extend beyond that.

With 94% of its workforce involved in informal labor, the government cannot provide income to everyone during the pandemic. The monthly assistance of U$ 3 that was offered, did not reach even half of poor families.

Economic difficulties limit testing capacity, which may explain the low number of fatal cases – the country ranks 96th in the world for covid-19 deaths. The lack of resources also compromises infrastructure in the country such as hospitals, as well as the regular compensation of public employees.

“Hospitals have been closed due to a lack of resources, nurses and doctors have been on strike for more than a year”, Japhet Moyo, the ZCTU general secretary recounts.

Moyo also adds that the Mnangagwa government has been using social distancing measures – necessary to contain the virus – as a pretext to ramp up repression since March 30th. “The number of people arrested for violating the quarantine is larger than that of people who actually got tested for covid-19”, said the political figure.

Since isolation measures were loosened on May 16th, every Monday, thousands of workers protest at their jobsites during their lunch breaks. They are demanding higher wages and criticizing the government’s response to the crisis as insufficient.